The Annual Meeting of Middle River Veterans Outdoors (MRVO) was held on 12 January, 2021. It was conducted in an enthusiastic, upbeat tone beginning with the announcement of a fantastic donation of a new “Tracked Wheelchair” from “Yorhom Medical Essentials” in Grand Forks, ND.

The annual reports included the difficult decisions made in 2020 concerning fundraising and cancelling most of the planned events. With the MN Government lockdowns for many months in 2020 the traditional “Charitable Gaming” support was almost non-existent.

In 2021 the “Charitable Gaming” is not expected to recover very quickly, however MRVO has garnered a new fantastic supporter as sponsor of our summer fishing – Humana Insurance Inc. is this generous sponsor. There have also been some personal donations and other unsolicited donations. With the unwavering support of MN Disabled American Veterans and several local DAV Chapters MRVO is gradually approaching a financial comfort zone.

The various event committees reported on plans and schedules for 2021 and the fundraising / publicity committee presented a detailed report.

During a debate in the US House concerning veterans’ access to federal lands for outdoor recreation Rep. Chris Smith (NJ) stated: “Research has increasingly shown that outdoor recreation can be an effective form of treatment, rehabilitation and healing for veterans”, this along with the comradery enjoyed by participants at our events is what MRVO is very optimistically planning on providing to 120 to 180 veterans in 2021. 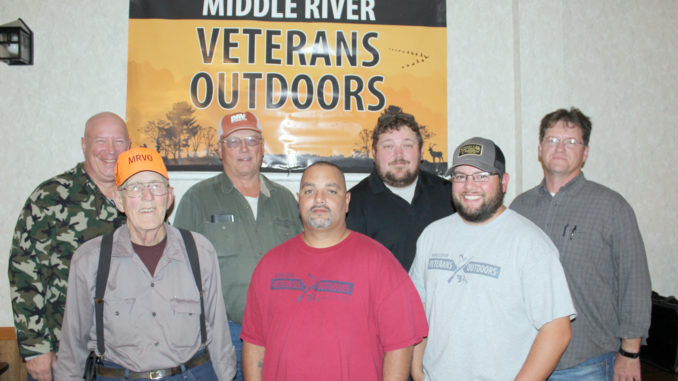 Larry Herke was participating in his first goose hunt, and Middle River Veterans Outdoors would make sure it was memorable for him and the disabled veterans he was there to assist.

Herke serves as the commissioner of the Minnesota Department of Veterans Affairs. He attended the Riley Kuznia Memorial Goose Hunt for Disabled Veterans in Middle River as a volunteer and to see how the MRVO was using two grants it recently received.

MRVO provides hunting and fishing trips to veterans. It recently received a grant from Minnesota veteran license plate proceeds and a grant from the Veterans for Veterans organization, Herke said. The former grant supplied funding for a track wheelchair to be used by the veterans. The other grant provided funding for such things as ammunition and blinds.

Herke was in Middle River to see how the MRVO was using the grants and to get some one-on-one feedback from veterans on how they were being served by his department. Nineteen disabled veterans participated in the Riley Kuznia Memorial Goose Hunt in the Middle River area. Sixteen volunteers, including MRVO Board members, assisted.

Herke already knows one improvement he would like to make. He seeks to increase the stipend for Honor Guards at veterans’ funerals. Herke noted that the stipend hasn’t changed since 2007 and it is a little low. Currently, the stipend is $50 per time an Honor Guard serves as a veteran’s funeral. Herke would like to raise it to $75 and then eventually $100. The stipend is used for the Honor Guard’s ammunition, transportation and uniforms. 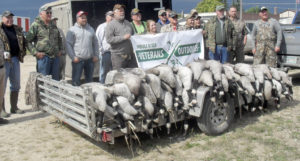 The Riley Kuznia Memorial Goose Hunt for Disabled Veterans was held Saturday, Sept. 14 in the Middle River area. Here, some members of the group are pictured with their haul. (Submitted)

Middle River Veterans Outdoors {MRVO) has been able to expand their equipment inventory thanks to the MN Department of Veteran Affairs Support Our Troops (SOT) grant. The Minnesota Department of Veterans Affairs SOT competitive grant program was launched in February 2016. These grants are financed from sales of the Minnesota “Support Our Troops” License Plates. Minnesota organizations with programs designed to “support and improve the lives of Veterans and their families” now may apply for grants ranging from $1,000 to $100,000. For more information about the state of Minnesota being the sponsoring agency for these SOT grants please go to their website: minnesotaveteran.org/sot

After almost a year of the MRVO Board of Directors commitment to the grant process, MRVO received $20,000 from the SOT grant fund. MRVO was able to purchase a tracked wheelchair, generator and three hunting blinds with the funds received. With the equipment expansion MRVO will be able to better fulfill their commitment to serving veterans by providing cost free outdoor activities.

MRVO will use the generator as a power source for many of the events and activities provided.

The hunting blinds will be used during MRVO’s annual Deer Hunt (Oct 17th
-20th for 2019) that will be awarded to 10 veterans. The deer hunt was added to the 2018 MRVO events with the cooperation of the MN DNR by allowing for a special deer hunting season to be organized and offered specifically by MRVO.